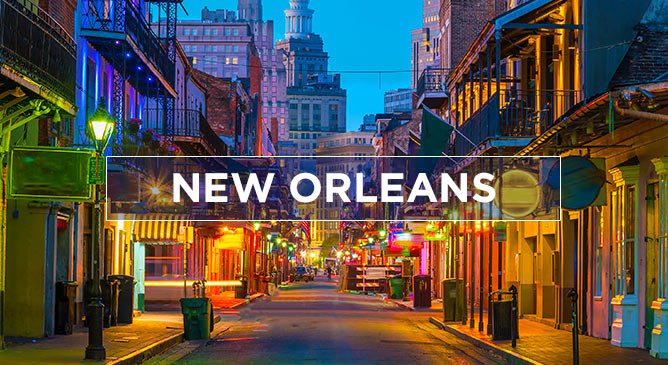 THINGS TO DO IN NEW ORLEANS

Perhaps best known for its annual Mardi Gras celebrations, New Orleans offers a unique blend of American, Spanish, and French culture that make the city enticing to visit year-round. The entire city shuts down during Mardi Gras (including schools and many businesses) so that everyone, young and old, can join in the celebrations. Families and friends gather on the streets, on their stoops, or on balconies. They barbecue on the median strip along the route, and throw elaborate house parties. Canal Street is a hotbed of bead lust. Royal and Frenchmen Streets are a dance of costumed free spirits and fantasies made real.

If you’re only in New Orleans for a short time, then the best way to learn about the city is to take one of the many tours on offer. Music tours, Plantation tours and District tours are among some of the most popular.

The big red double-decker buses offer the Hop On, Hop Off City Sightseeing Tours. Although New Orleans is best seen by foot these buses are a good way to see the city at your own pace. The buses stop at 11 locations—from the French Market to the World War II Museum in the Central Business District to Magazine Street in Uptown.