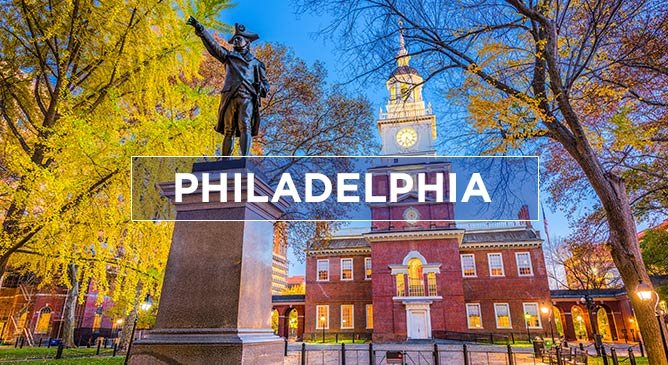 Things to do in Philadelphia

Known as the birthplace of America, Philadelphia offers a vast array of historic activities. Starting with a guided tour of Independence National Historical Park – America’s most historic square mile – you will learn about where the Declaration of Independence and the Constitution were drafted, debated and adopted, and where the nation’s first executive mansion, Independence Hall, a UNESCO World Heritage Site stood.

But before you leave, be sure to snap a photo and also learn about the Liberty Bell, a globally recognized symbol of freedom and visit the Betsy Ross House, the historic house commemorates the life and accomplishments of Betsy Ross, a Philadelphia patriot believed to have made the first American flag.

From ballet to theatre to the orchestra and beyond, it’s no wonder Philadelphia was ranked America’s No. 1 city for culture by Travel + Leisure magazine. Explore Museum Mile on Benjamin Franklin Parkway, home to some of the nation’s most iconic museums and institutions.

Marvel over 200,000 examples of art and craft spanning more than 2,000 years in history at the Philadelphia Museum of Art, which is also home to the “Rocky Steps” and Rocky statue featured in the Academy Award-winning film Rocky. The Rodin Museum is home to the largest Rodin collection outside of Paris and is where iconic statue “The Thinker” remains. The impressive Barnes Foundation is where you will see one of the finest collections of post-Impressionist and early Modern paintings with extensive works by Pierre-Auguste Renoir, Henri Matisse and Pablo Picasso.

The neighbourhoods of Philadelphia are fascinating, adorned with public art that is both reflective and breathtaking. The city is comprised of vibrant districts with each area having its own character. Society Hill is one of the oldest parts of the city with exquisite Georgian and Federal architecture. This charming neighbourhood is packed with historic sights and cultural institutions.

Philadelphia's bustling Chinatown is the centre of the Asian culture and community in the city. The Chinatown Friendship Gate is a popular landmark in the neighbourhood. South Street in Center City is one of Philadelphia's top attractions famed for its bohemian vibe and immense retail and restaurant presence. Bella Vista is the hub of the Italian community in the city. The neighbourhood boasts a concentration of Italian establishments such as restaurants and shops - in fact it is hailed as the brunch capital of Philadelphia.

While in Philadelphia, you can also experience the world's largest outdoor art museum and one of the U.S.’s most innovative art programs, the Mural Arts Program. Philadelphia is the Mural Capital of the World and boasts over 3,600 murals as well as outdoor sculptures.

With the largest city-owned urban park system in the world, Philadelphia is the greenest city in America. Fairmount Park offers a 9,000+ acre park system with 215 miles of recreation trails. Endless adventure trails, riverfronts, bicycling trails and walking/running paths are woven through the city unlike anywhere in the U.S. Named “one of the world’s 10 best cities for parks” by Frommer’s, Philadelphia offers a wide range of outdoor activities and urban adventures.