Sale of the Year

Icon of the Seas

Icon of the Seas will be world’s biggest cruise ship!

Royal Caribbean has done it again. The cruise line has announced it’s building the largest cruise ship ever. The new Icon of the Seas will carry 7,600 passengers at maximum occupancy (or nearly 10,000 people including the crew) when it first sets sail January, 2024. 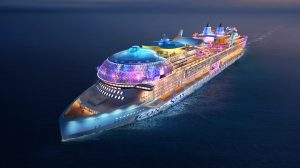 The ship will be 20 decks high and 1,198 feet long and measure 250,800 gross tons. Icon of the Seas will attract families and have eight neighborhoods (areas of the ship themed around a type of activity). Five are new to Icon, and three are returning from previous Oasis-class ships (such as the Suite Neighborhood, Royal Promenade and Central Park).

Icon of the Seas will have plenty of mind-blowing and biggest-ever attractions, including:

Thrill Island top-deck neighborhood, category 6, features the world’s largest water park at sea, with six water slides, including the tallest drop slide at sea, raft slides that can hold four riders at the same time, and mat-racing slides. This active area is located in the new Thrill Island top-deck neighborhood. On this deck, there is also a ropes course-style attraction centered around the ship’s crown-and-anchor logo.

Royal Caribbean has created the AquaDome, an indoor AquaTheater, by taking the AquaTheater from its Oasis-class ships (where acrobats and diving shows take place) and moving it up to the ship’s top and indoors into a multipurpose space with floor-to-ceiling windows that offer a 360-degree view from all sides. There will also be restaurants and bars in this space. The Two70 entertainment area found on Quantum-class ships might look familiar to Royal Caribbean fans.

The Ultimate Family Townhouse will be a three-story version of Royal Caribbean’s enormous two-deck-high Ultimate Family Suites found on Oasis-class ships. In addition to child and adult bedrooms, family-friendly living areas, and ocean views, the giant suite will have a fenced-in backyard play area with direct access to Surfside, a new neighborhood designed especially for young families. 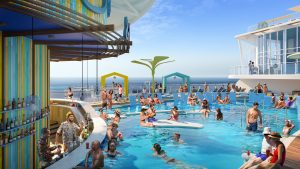 A new pool-themed version of Royal Caribbean’s carousel, family-friendly restaurants and shops, a splash area for babies and kids, relaxation pools and lounges, and a bar where “mommy and me” mocktails and cocktails are available for grown-ups will be available in Surfside. The Surfside neighborhood will be surrounded by new family cabins, suites, and other family-friendly ship areas.

There is also a swim-up bar above Surfside, which is the first-ever infinity pool to be suspended at sea. A beach club-inspired neighborhood with terraced sun decks and convenient bars surrounds the Hideaway.

The three-deck Chill Island pool area offers four of the ship’s seven pools, along with plenty of ocean views. There are several swimming pools, including Royal Caribbean’s first swim-up bar, and one that Royal claims is the largest at sea. Besides the main pool area, there will also be an adults-only area and another pool with an infinity edge. There will be cabanas available for rent in this neighborhood. 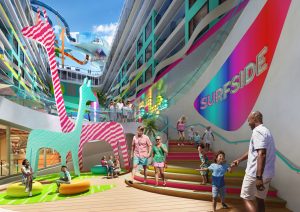 This ship-within-a-ship enclave has the largest suite neighborhood ever: The suite neighborhood on Wonder of the Seas came the closest to being an exclusive, self-contained suite enclave such as Norwegian Cruise Line’s The Haven or MSC Cruises’ Yacht Club. It all comes together on Icon of the Seas with the line’s largest Suite Neighborhood, three decks high and featuring a two-story Coastal Kitchen restaurant (exclusive to suites and Royal Caribbean’s most loyal guests) and The Grove, a new multilevel sundeck with a Mediterranean restaurant, pool and hot tub.

With 28 different cabin types and suites, the Icon of the Seas offers something for every type of traveler, from family cabins to inside cabins with extra-large walk-in closets to AquaDome panoramic rooms with ocean views. 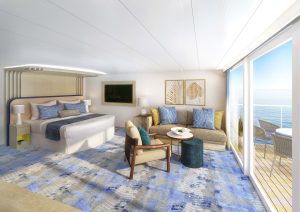 Royal Caribbean’s Perfect Day at CocoCay, with its multiple beaches and 13 waterslides, will be visited on each of the ship’s weeklong Eastern and Western Caribbean itineraries. The booking period opens to Royal Caribbean’s past guests on Monday, and to the general public on Tuesday.

The Icon of the Seas is the first in a new class of vessels Royal Caribbean is planning to introduce by 2026, dubbed the Icon class. The remaining three sister ships will be delivered by 2026. In 2024, the line will also deliver one more Oasis-class ship.