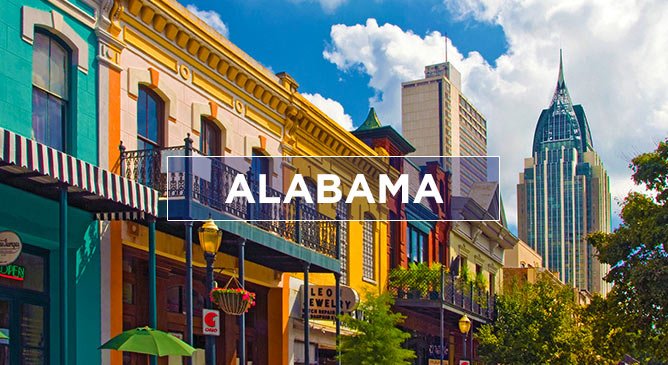 Things to do in Alabama

The state of Alabama has a unique blend of things to do. From historic sights to breath-taking beaches, there is so much to enjoy and explore. Below are our recommended things to do in Alabama.

US Civil Rights Trail – Throughout the State

The US Civil Rights Trail is a historic trail that takes in a collection of churches, museums, courthouses and schools, as well as other landmarks throughout the Southern States. The trail highlights where activists challenged segregation and aimed to advance social justice throughout the 1950s and 1960s. Along the trail through Alabama, visit Selma which was the centre of the decisive shift in the American conscience, visit where Dr. Martin Luther King Jr inspired millions and challenged the masses, explore museums that preserve the legacy that was set and so much more on this incredible journey through history.

Rosa Parks was a Civil Rights Activist in Alabama and in Montgomery you can visit the museum which was built in dedicated to her. The Rosa Parks Museum, located in Montgomery was built next to the site where Rosa boarded a public bus and was arrested for refusing to her seat up for a white passenger. The Museum centers around the story of her life and the role she played in the Civil Rights Movement.

Montgomery, the capital of Alabama is a must visit when travelling through the state as it has some fascinating historic attractions for you to enjoy. Learn about the Civil War and Civil Rights, visit the historic State Capital Building which is where Jefferson Davis took the Oath of Office, and visit the steps where Dr. Martin Luther King Jr. delivered his moving speech and so much more.

Visit the Statue of Vulcan - Birmingham

The Statue of Vulcan is a 58 foot tall statue that looks out over Birmingham, Alabama. Vulcan, the god of fire is the largest cast metal statue, ever made in the USA. When you visit this iconic monument on Red Mountain, you can enjoy panoramic views over the city of Birmingham and the surrounding areas.

US Space and Rocket Center - Huntsville

The US Space and Rocket Center, located in Huntsville is the world’s largest space attraction and is home to dozens of interactive exhibits. On-site you can also see the Apollo, Mercury and Space Shuttle spacecraft. This a must do for any space enthusiasts or those travelling with little ones.

The Muscle Shoals Sound Studio is a historic studio where many hit records were produced in the 1960s and 1970s by many famous artists including Aretha Franklin and the Rolling Stones. The original recording studio still stands today.

If you’re visiting Alabama in the spring, why not plan your trip around Mardi Gras and visit Mobile to join in the festivities! Mobile was the home of the first ever Mardi Gras celebration which took place in 1703. Today, you can still enjoy the party as you dance the night away and enjoy a celebration which includes live marching bands, colorful floats and an experience like no other!

Many don’t realise, but Alabama is home to 32 miles of beautiful beaches along the Gulf Coast! From relaxing in the sun, to sampling delicious seafood and trying scuba diving or perhaps going on a fishing trip, there is so much to enjoy along the coast of Alabama.