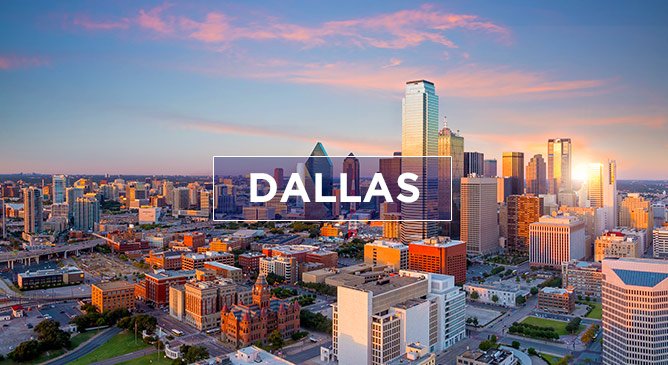 Things to do in Dallas

Dallas is a fantastic city with so much to offer. Things to do in Dallas range from museums to ranch visits, skyline sights and more. Here are some of our top things to do on your trip.

Perot Museum of Nature and Science

The Perot Museum of Nature and Science in Dallas will put your curiosity and brain into overdrive! Race against a virtual T Rex, touch a tornado or take on a robot in the remote control robot arena! With 11 hands-on exhibits and a state of the art 3D theatre, the Perot Museum makes for a fantastic day out.

If you would like to see the Dallas skyline from the skies, a trip up the Reunion Tower GeO-Deck needs to be on your Dallas agenda! Enjoy unobstructed views of Dallas’ famous landmarks as well as its breathtaking views which go as far as 32 miles. While there, make use of the complimentary high-definition telescopes. As part of the experience you can also create your own light show with interactive touch screens called Halo.

Walk into history as you walk into the Sixth Floor Museum in the Texas School Book Depository where significant evidence of John F Kennedy’s sniper assassin was found. Relive the story of US President John F Kennedy’s life, his presidency and his tragic death in Dallas. In the museum you can see the sniper's perch and where the rifle was found. You can also examine an FBI scale model of the Dealey Plaza and learn more through interactive touchscreens.

No visit to Dallas is complete without visiting the legendary Southfork Ranch. Home of the longest running series in television history, Dallas, this Texan ranch attracts visitors from all over the world. Year round tours of the ranch take place daily and on the tours you can learn all about the workings of the ranch and its link to the infamous Dallas TV show. On-site there is also a Dallas Legends exhibit which features an array of memorabilia from the series including the gun that shot J.R.

Dallas is renowned for its excellent sports teams so while there, try to catch a Dallas Cowboys game or if baseball is more your thing, the Texas Rangers play in Dallas too! Sporting events in Dallas make for a great day out and they are the perfect opportunity to soak up that sporting Texan atmosphere!

Whether you're visiting with children or with your significant other, a visit to the Dallas Zoo is the perfect way to spend a relaxing afternoon. With 106 acres to explore, thousands of animals to visit and lots of activities for the you to enjoy, the Dallas Zoo is a fantastic destination. Throughout the park you can also witness the Zoo’s unwavering commitment to wildlife conservation as you learn about the animals that live there and the support the Dallas Zoo gives to worldwide research and protection of endangered species.