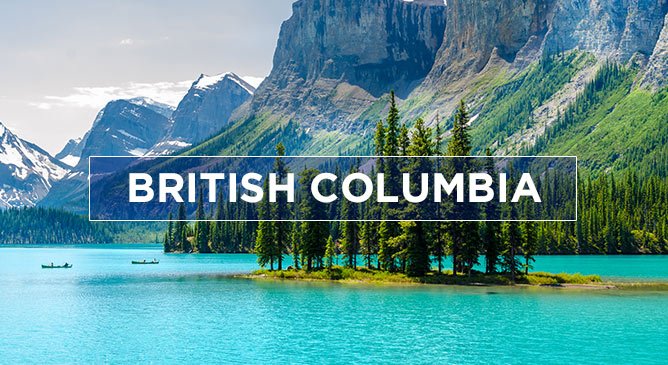 Canada’s westernmost province, British Columbia, is where rugged nature meets vibrant culture. It’s a place dominated by mountain ranges which allows for the most beautiful driving routes and skiing at some of the world’s best ski resorts. It’s also the only province in Canada that can boast about offering the West Coast Special - Ski and play golf all in the same day. The most popular destinations in British Columbia are Vancouver , Victoria, Whistler and the Kootenay Rockies. Vancouver is a favourite cruise ports on the West Coast for Alaskan cruises and cruises up and down the Pacific Coast.

Vancouver is British Columbia’s largest city. With a population of around 2.4 million, it’s a vibrant, multi-cultural urban centre which is famous for it’s beautiful ocean and mountain setting.

Victoria is British Columbia’s provincial capital and it’s a beautiful city filled with Edwardian architecture, lavish gardens and great food. Victoria is situated at the southern tip of Vancouver Island and is just a short flight from Vancouver itself.

Whistler is known to be a favourite year round destination among American tourists. It is located along the beautiful Sea-to-Sky Highway, just 2 hours north of Vancouver . Whistler Blackcomb is consistently ranked as North America’s best skiing and snowboarding destination.

The Kootenay Rockies region of British Columbia is surrounded by the Monashee Mountains, Selkirk and Purcell Mountains. You’ll find the enormous Kootenay and Arrow Lakes here as well as the huge wilderness park of Valhalla and Kokanee Glacier.

THINGS TO DO IN BRITISH COLUMBIA

Depending on where you find yourself in British Columbia, you can enjoy wildlife on a whale watching tour, a grizzly bear tour, or, why not stroll through public gardens, explore museums or watch a sporting event. Some of the most popular attractions in British Columbia include a visit to Stanley Park, the Pacific Rim National Park and the Capilano Suspension Bridge! Whether you decide to hike up a mountain, take a wine tour, tackle rapid waters or take in the stunning wildlife, there’s something for everyone in British Columbia. Shopping in British Columbia is an exciting, diverse experience with each region offering something different to suit everyone! Vancouver would be the main shopping destinations. With fresh fish from the Pacific Ocean and fresh produce, meat and dairy from lush farming valleys, British Columbia has all the right ingredients when it comes to top notch dining! 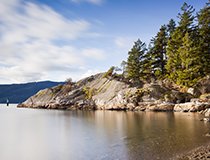 The climate in British Columbia is influenced by latitude, mountainous topography and the Pacific Ocean. Because of the size of the province of B.C, snowfall, rainfall and temperature vary throughout the year. Temperatures are generally warmer in the south of the region and rainfall is more common along the coast line.

British Columbia is just waiting to be discovered by you! If you are looking for a different kind of holiday that combines breathtaking surroundings, history and adventure, then a British Columbia holiday is just what you need. Call our team of Canadian travel experts today on 01-8173535 who will be delighted to offer you all the advice you need.